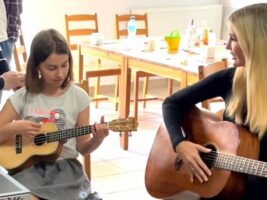 Ivanka Trump recently shared a photo of herself jamming on the guitar with a young girl from her latest trip to Poland to meet with Ukrainian refugees.

READ MORE: Ted Nugent says he would “love” supporters to go “berserk on the skulls” of Democrats, Marxists and Communists while at a Trump rally

Last week, Trump took a trip to Krakow and Warsaw following an invite from global non-profit CityServe to visit Ukrainian refugees and deliver food to their families.

Grateful to have spent the last few days in Krakow & Warsaw to meet Ukrainian and Polish faith leaders who have shown so much compassion & love to Ukrainian families in need & for the opportunity to bear witness to the love, strength & resilience within each of these families. pic.twitter.com/nq3ZD5ORRo
— Ivanka Trump (@IvankaTrump) May 22, 2022

A CityServe spokesperson told The Daily Mail that Trump “met with dozens of pastors serving Ukrainians on the frontlines, many of which helped support the 1 million meal distribution in March,” and that the organisation “brought meals, financial support and toys to dozens of Ukrainian families seeking both short-term and long-term refuge in Poland until they can safely return to Ukraine.”
In addition to the touching guitar-ukulele session she had with the young girl, Trump, whose “heart for hurting Ukrainian refugees” is described as “nothing short of inspirational” by CityServe, was also seen hugging children and serving them food in photos shared on her social media account.
In 2020, the former First Daughter revealed in an interview that her family has “reconnected to some of life’s simple pleasures” during the early days of the pandemic such as playing board games. Trump herself “took up playing guitar” because her husband (and senior adviser to President Trump) Jared Kushner “was working very late nights”.
“I would come home and put the kids to bed and after I went back online and finished my work, I’d be sitting there. And so I taught myself or am ‘teaching myself’ how to play guitar,” the mother of three said.
CityServe also thanked Trump for her support for the outreach program on their Instagram account, saying “thank God for leaders like Ivanka who genuinely care and are willing to step up and make a profound difference in so many lives.”

The post Ivanka Trump shares a musical moment on guitar with a Ukrainian refugee during Poland trip appeared first on Guitar.com | All Things Guitar.