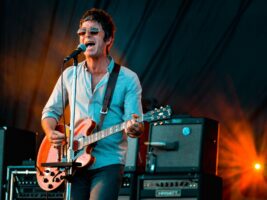 Noel Gallagher on being branded “an enemy of the people” by China for playing Tibetan Freedom Concert: “I’d forgot I’d even done it”

Noel Gallagher says he’s “banned from China for life” for playing the Tibetan Freedom Concert in New York back in 1997.

READ MORE: Liam Gallagher thinks Noel would give him one of his kidneys if he needed, despite him being ‘up his own arse’

The Flying Birds frontman told The Daily Star that he has a letter from the Chinese government deeming him an “enemy of the people” for his appearance at the concert, though his brother Liam is free to travel to China as he did not take part. “I’m an enemy of the people,” Noel said, sharing that he only discovered his ban when Oasis were applying to play a show in China 20 years ago.
“We’d agreed to go and all the paperwork came and you had to send through a list of your songs and the Chinese government sent you back a list of songs that weren’t appropriate and we’d agreed to do all that,” Noel continued. “About a month before we were about to leave I got a letter saying you lot can come but you can’t because of this thing you did for the Tibetan people.
I’d forgot I’d even done it.”
Noel said that despite telling the Chinese authorities that he was not interested and “not arsed” about Tibet, his application was rejected. He also related that he received the letter deeming him an “enemy of the people” from the Minister of The Interior, and that he had only played at the Tibetan Freedom Concert because the other members of Oasis hadn’t been bothered to.
“Oasis were on tour at the time and it was a day off and Oasis got asked to do it and no one else would do it so it was like I’ll do it,” he explained.
Noel recently made headlines after he complained that rising costs are pricing working-class kids out of buying instruments and renting rehearsal spaces. Lamenting “loads of middle-class bands” are merely “wearing guitars as oppose to playing them”, Noel also bemoaned how “wine bars and flats” have replaced affordable rehearsal spaces.
The post Noel Gallagher on being branded “an enemy of the people” by China for playing Tibetan Freedom Concert: “I’d forgot I’d even done it” appeared first on Guitar.com | All Things Guitar.