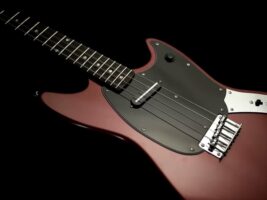 Eastwood Guitars is celebrating the 10th anniversary of its collaboration with Warren Ellis with a feisty new tenor electric guitar that’s seriously stripped-back.

The Warren Ellis Ten Tenor is a four-string guitar, but takes minimalism to a new level with its controls: there are no knobs whatsoever. What you’re left with is an on-off switch to engage the single blade neck pickup, as well as a speedy kill-switch button.
“By taking volume and tone circuits out of the equation you get the sound from your fingers to your pedals/amp with zero interference,” says Eastwood, which says the result makes playing dynamics come alive, as you’ve only your own numbers to rely on.
In terms of construction, this compact Mustang-style has a solid alder body and a bolt-on maple neck with a modern-C shape. Its fretboard is rosewood with dot markers across its 21 medium jumbo frets.
The bridge is an adjustable Tele-style one, which should mean string-changes are easy and getting the right action is just an allen key away.
And as for the single Warren Ellis Blade pickup, the same seen on other models in the series – but for a better idea of what it sounds like, here’s the demo:

Coming in its own custom hardshell case, the Warren Ellis Ten Tenor electric guitar from Eastwood is priced at £840; it comes in Aubergine, Vintage White and Black.
The post Eastwood’s Warren Ellis series celebrates 10 years with a minimalist tenor electric appeared first on Guitar.com | All Things Guitar.