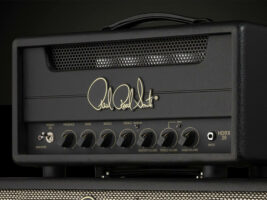 PRS has announced a new 20-watt amplifier that features a “newly-documented” circuit based on one of Jimi Hendrix’s personal amplifiers. Here’s what to know about the PRS HDRX 20.

The HDRX is based on one of Hendrix’s personal amplifiers – presumably his 59’ Marshall Super Lead 100W – “purportedly used at Woodstock” and studied by Paul Reed Smith and PRS Amp Designer Doug Sewell in 2018.
The amp is said to be designed to push the high-end, and remains clear without over-harshness. “The PRS HDRX shines without glaring and allows for aggression that can be backed off for smooth, sweet tones,” writes a product description.
It’s driven by a pair of 5881 power tubes, which PRS chose for their “lower power, smaller size, and organic voice” – these are said to deliver a thick and articulate tone that’s optimised for break-up within the 20-watt output in a pleasing manner.
Controls include a three-band TMB tone stack, a two-way bright switch, high-mid gain switch and a presence knob – all these, said to mirror the parameters on the amp Hendrix played at Woodstock. Further, the amp is said to have internally bridged channels, each with their own treble and bass volume controls.
PRS has apparently come close to the sound of an old vintage plexi, says Eric Johnson, who said in a statement: “PRS has painstakingly recreated the sound of the old transformers and it makes quite a difference in the musical smoothness of the sound.”
And along with the 20-watt head, PRS is also introducing a HDRX 1×12 cabinet, with Celestion V-type speaker, to go with it.
Check out the demo below:

The HDRX 20 lists at €959, while the HDRX 1×12 lists at €318.
Learn more about the HDRX 20 (along with the larger HDRX 50 and HDRX 100) at the PRS website.
The post PRS HDRX 20 features a “newly-documented” circuit inspired by Hendrix’s Marshall Plexi appeared first on Guitar.com | All Things Guitar.