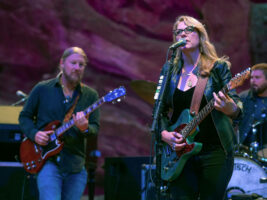 Last week, the Tedeschi Trucks Band surprised fans by performing their own take of the Harry Styles hit song, Sign Of The Times.

At the Beacon Theatre in New York – a regular residency for the band – Susan Tedeschi took to the mic on closing night to sing a hauntingly beautiful cover of the 2017 pop hit.
It might have come as a bit of a surprise to fans of the free jammin’ band, who mightn’t expect the blues stalwart to include a more contemporary track in their set list.
Listen to the track here:

According to a fan account of the performance, shared as a comment on the YouTube video, fans were blown away by Susan Tedeschi’s vocal performance. “None of us could believe what we were hearing,” Paul Faraguna wrote.
“I’ve been a fan of hers since she debuted in the 90s. I’ve seen her and this band perform live maybe 30 times. This performance ranks as possibly the best I’ve ever seen her do, and one of the greatest vocal performances I’ve seen live from anyone.”
“I was literally getting choked up as she sang it. And watching this video brings it all back.”
In recent Tedeschi Trucks Band news, the final instalment of the group’s quadruple-album project, I Am The Moon, dropped earlier this month. Comprising 24 original tunes, the band deemed the release the “most ambitious studio project” of their career; it presents an alternate perspective into the 12th Century Persian poem Layla and Majnun, the source material of the seminal blues Derek And The Dominos album Layla and Other Assorted Love Songs.
The post Tedeschi Trucks Band share incredibly moving cover of Sign Of The Times by Harry Styles appeared first on Guitar.com | All Things Guitar.