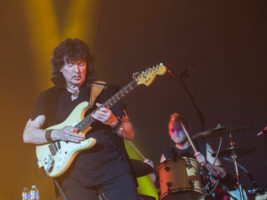 Guitarist Ritchie Blackmore has spoken about his close relationship with the late Jon Lord, who grew to become his “best friend in the band” after the two came together in a group led by Chris Curtis.

READ MORE: Ritchie Blackmore Recalls When Hendrix Came To England: “Jeff Beck Came Up To Me And Said ‘We’ve Got To Do Something About This Guy’”

Speaking as a guest DJ for SiriusXM’s Guitar Greats, which debuted last month (April 12), the musician shared some of the tracks that inspire him most, detailing anecdotes of his musical heroes along the way.
Blackmore spoke about Lord, who died in 2012, ahead of spinning his Carry On… Jon which he wrote in tribute and released a year later under Blackmore’s Night.
It was Chris Curtis, drummer for British band The Searchers, who brought Lord and Blackmore together in England, with the prospect of playing in a new band – one which would evolve into Deep Purple.
“I was living in Hamburg and I got a telegram from Chris Curtis saying ‘Come on over, I need you. We’re making a band’,” he described. “I headed over to England. I met Chris, who was obviously on some sort of medication and he said, ‘Right. Are you ready?’ and I went ‘Well… who’s in the band?”
Blackmore continues, elaborating on how Jon Lord was enlisted as the keyboard player for the upcoming band.
Whilst he had met Lord previously, already recognising him as a “brilliant” musician, Blackmore continues to describe how it was the unusual behaviour of Curtis that had brought the two together during this time; the musician had established himself to play nearly every remaining role in the band:
“He went ‘we have Jon Lord [on keys]’ […] and I went, ‘Well who’s on bass?’ and he went ‘Well, I am,’ so I said ‘Okay, who’s on drums?’ and Chris went ‘I am,’ and I said ‘oh, well that’s great’”. Blackmore continues, “[Curtis then] goes ‘I’m also playing first guitar… you’re playing second guitar’ and I went ‘okay, so I’m playing second guitar to you? Very good’ […] that’s how we started Deep Purple.”
It was only upon Curtis’s departure that the band evolved into the version of Deep Purple most widely recognised today, with both Blackmore and Lord remaining close throughout the duration.
“[I remember that Lord and myself] met the managers involved and they thought [Curtis] was a little bit crazy”. He continues, “[When we both] got together, I said to Jon Lord ‘Jon, this Chris Curtis… he’s a bit of a strange guy, right?” and he said ‘Yes’. […From then], Jon was probably my best friend in the band.”
“When [Jon] did pass away, it did affect me more than I thought it would, so I wrote the tune Carry On… Jon,” Blackmore said. “It was very difficult to actually play that particular tune on stage without becoming emotional. This is for Jon.”

The post Ritchie Blackmore remembers Jon Lord and the start of Deep Purple: “He was probably my best friend in the band” appeared first on Guitar.com | All Things Guitar.