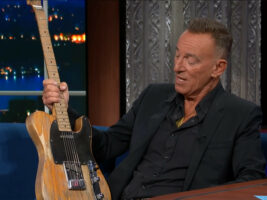 Bruce Springsteen has brought out his legendary Born To Run Fender Telecaster, and told the story of how he came by the storied guitar.

Appearing on the Late Show With Stephen Colbert, Springsteen brought out the well-played instrument to tell its story. As well as being well-played it, of course, also appears on the cover of Born To Run.
“I’ve played this guitar for 50 years. I bought it when I was 22 years old for $185 on Highway 34, I think in Belmar, New Jersey, from a great guitar man named Phil Patillo, and I’ve had it ever since.
“It’s kind of a mutt. It’s made up of two guitars but this guitar has been in every club, theatre, arena and stadium across America, and most of the world,” he said, before adding: “It’s been around a bit,” while showing off the extensive wear across the guitar’s body.
Colbert then asked how Springsteen feels when he plays other guitars, ones that he hasn’t been playing for half a century. “This [guitar] feels like my arm,” Springsteen explained. “If I have this guitar on, I don’t have anything on. Anything else I pick up, it’s a guitar. I’ve played this for so long that it just became part of [my] natural physique.”
“I don’t play it as much these days because… I’ve sort of put it a little bit out to pasture, as it’s done so much good work for me.”
See Springsteen tell the story below.

The post See Bruce Springsteen tell the story of his Born To Run Telecaster appeared first on Guitar.com | All Things Guitar.