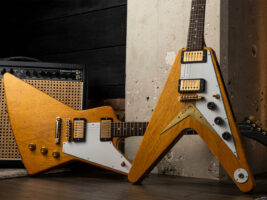 Summer NAMM 2021: All the best new gear from the show

Summer NAMM 2021: The world has changed a lot in the two years since the Summer NAMM show last opened its doors at Nashville’s Music City Center. A scaled-down two-day event it may be but, with no mask mandate, walking around the first major North American musical instrument show to take place since the start of the pandemic feels a lot like the old ‘normal’.

READ MORE: Everything you need to know about Summer NAMM 2021

If it’s new gear you are looking for, the likes of Gibson, Epiphone, IK Multimedia, Reverend and more are on hand to provide. Read on for some of our highlights from the 2021 Summer NAMM Show.

Gibson 1958 Korina Flying V and Explorer
Though Gibson’s presence at Music City Center is limited to a throne made from guitars designed to allow people to pose for selfies and indulge their inner gui-Targaryen, the Gibson Garage is quite literally a stone’s throw away.
Before the Garage opened to the public, we stopped by to check out the Custom Shop’s painstaking recreations of the 1958 Flying V and Explorer – including Brazilian rosewood ‘boards and featuring Murphy Lab ageing. Just 19 Explorer and 81 Flying V models will be made available, reflecting the number of instruments shipped during their first year of production.

IK Multimedia X-Gear pedals
Plug-in wizard IK Multimedia has moved into hardware with a quartet of modelling units designed to share presets with AmpliTube 5 SE. The colour-coding of the enclosures appears to be an obvious nod to Line 6’s classic stompbox effects modelling series that spawned the DL4, with distortion/overdrive, modulation, delay and reverb bases all covered.

Epiphone Slash Collection
Epiphone’s show sample of the Slash J-45 was sadly reduced to splinters en route to Tennessee but we did get to see a quintet of affordable new signature Les Pauls from the newly announced Epiphone Slash Collection.
“Slash was intimately involved in every aspect of the development of his new Epiphone Collection,” said Gibson brand president Cesar Gueikian. “We are all excited to see his fans around the world rock out with them!”

Third Man Hardware
Third Man Records has become a Nashville institution and its Third Man Hardware imprint made its Summer NAMM debut in style, with an interactive stand replete with the pedal collaborations that the brand has released in recent years.
The real star of the stand, however, was the Copper Triple Jet owned and used by Jack White himself. Built in 2006 by luthier Randy Parsons, the distinctive instrument was available on the stand as a demo guitar for anyone at the show to pick up and play. Consider our minds blown.

Reverend Greg Koch Gristle 90
The final product in our rundown of day one highlights, Reverend’s latest collaboration with Greg Koch is our favourite to date, with Fishman P-90 pickups accompanied by korina construction and a Bigsby tailpiece. It won’t make you play quite as outrageously well as Mr Koch, but you’ll certainly look and sound good while trying.

Gibson Original Collection Non-Reverse Thunderbird
Gibson has expanded its bass range with the addition of this seriously drool-worthy four-string to its Original Collection. Seen here in Sparkling Burgundy, it also comes in Inverness Green and Pelham Blue and is guaranteed to make you feel like a rockstar when strapped on.

Taylor scoops two Best In Show awards
The Californian company chose not to launch any new products at the show but it still scooped two of NAMM’s coveted Best In Show awards. The TaylorSense guitar health monitoring system was a winner in the Best Add-On Or Accessory category, while the American Dream series was honoured as one of the overall Best In Show. Check out the full list of winners here.

D’Addario XS strings
The New York company is calling its new XS strings “the most innovative coated string ever created”, and their performance has already drawn accolades from high-profile industry figures. With a coating that’s ten times thinner than human hair, it’s billed as a leap forward in coating tech that could be a game-changer for string life. Find out more via D’Addario.

Martin unveils new CEO
Like Taylor, Martin chose to showcase existing models at Summer NAMM rather than launch a raft of new gear. However, new CEO Thomas Ripsam was in attendance and we sat down with him to find out about his lifelong passion for guitars and his plan for the future of the company. Stay tuned for our interview, coming soon.
Read more news from Summer NAMM 2021.
The post Summer NAMM 2021: All the best new gear from the show appeared first on Guitar.com | All Things Guitar.