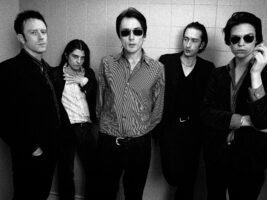 The Genius Of… Coming Up by Suede

“It doesn’t matter how many times they grind us down. It doesn’t matter how many times they stamp us into the ground, because we always come back.” Regularly proclaimed Suede’s frontman Brett Anderson throughout the band’s 2019 tour, usually in prologue to the explosive opening of one of the band’s signature songs: Trash. This crucial track, released in 1996 as the lead single from the band’s effervescent third record Coming Up was more than just a rallying call to the many dispossessed outsiders who identified with them, Trash was a statement of intent – and the battle cry of an all-new formidable line-up.

With former inventive guitarist Bernard Butler no longer in play after the fractious recording of 1994’s Dog Man Star, the vultures had been circling ominously overhead. Many assumed that, without Butler at the band’s musical helm, Suede were fated to sink beneath the waters of public disinterest. Meanwhile, the Britpop movement the band had fomented consumed the airwaves – albeit in a form near-unrecognisable to the Suede’s original vision.
A delicious victory then, when their next move, the musically rich yet widely accessible Coming Up, became the band’s biggest ever commercial success. Spawning a staggering five UK top ten singles, the album revitalised the band’s fanbase and established a new variation of Suede’s sound. But, as Brett Anderson remembered in his second autobiography, Afternoon With The Blinds Drawn, “Coming Up was an album snatched against the odds from the savage jaws of failure.”

Young and not tired of it
Central to the re-tooled Suede sound was the addition of two new members. Firstly, there was Neil Codling on keyboards. The cousin of Suede’s drummer Simon Gilbert, Codling became something of a second frontman during the Coming Up era, with his natural good looks perfect for magazine photoshoots, and for taking a prominent role in the band’s videos.
The second, was the man tasked with the mountainous duty of filling that pivotal guitarist role. Rather than opting for an established session player or a high-profile guest from another band, Suede took a monumental gamble on a 17-year old fan. Responding to a low-key box ad that the Mercury Award-winners had placed in the Melody Maker, the young A-level student had posted in a four-track tape of his renditions of various Suede songs. “I put the cassette in, expecting to be underwhelmed, and I wasn’t,” Anderson recalled in The Insatiable Ones documentary, “I heard this very eloquent, powerful, technically proficient guitar playing. It was the first time I’d heard someone play something of ours and really do the guitar part justice.”
Hailing from Poole, Dorset, the teenage Richard Oakes wowed the band further during his live audition “It was very much a case of keep your head down, play the songs.” Richard remembered in David Barnett’s Love and Poison “At the end of Metal Mickey, Brett kicked over his mic stand because he was so excited. But I still didn’t really think they’d ask me to join.”
Putting his studies and the prospect of uni to one side, Oakes promptly signed up to be the guitarist in one of the UK’s then-most important bands, going out on tour to promote the recently released Dog Man Star. “It was kind of like being eased into it –  if the first thing I’d had to do was write an album it would have been a lot more difficult” Admitted Oakes in a DVD interview on a Coming Up reissue.
But the band’s longevity was dependent on being a healthy creative unit too. Producer Ed Buller, who had shepherded all of Suede’s albums to date, tells us that “The moment it really clicked with me that Richard could come up with the goods was working on the B-sides for a later Dog Man Star single. He wrote a song called Together. I remember while we were doing it, thinking that this was too good to use as a B-side. It was a fucking great song. It’s got a huge chorus, and Richard pulled out all the stops.”

Standout guitar moment
The Chemistry Between Us

For more reviews, click here.
The post The Genius Of… Coming Up by Suede appeared first on Guitar.com | All Things Guitar.