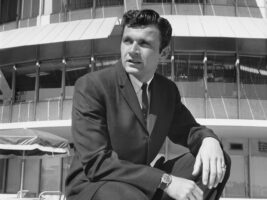 It’s just possible that we might have been guilty, one or two times in our history, of being too hasty in labelling guitar players of yesteryear as ‘pioneering’. While it’s true that the story of popular music is a tale of constant inspiration, and cue-taking from forward-thinking experimenters, it does seem that terms like ‘influential’ or ‘groundbreaking’ are all too frequently called upon (and not just by us, mind) that the true meaning of those terms, when applied to those genuine innovators, is diluted.

The reason we’re emphasising this at the outset, is because Dick Dale’s astonishing abilities, highly distinctive sound and eardrum-shattering volume had an overwhelming impact on electric guitar players the world over. Though, many of whom weren’t even aware of the man himself. Despite a short recording career, Dale’s often-overlooked impact on the instrument set off a chain reaction of influence that continues to this day.
The significance of Dick Dale’s revolutionary approach to the instrument – in both performance and technological terms – ignited much of what we love about the sound of our favourite instrument. Beginning as a spur-wearing rockabilly act, Dale’s completely idiosyncratic way of holding his instrument and fretting notes coupled with a fortuitous partnership with guitar manufacturing supremo Leo Fender. This would result in the birth of the energised drive of surf rock, and a more front-and-centre role for the guitar in general.

Let’s go trippin’
“I’m not a guitar player. I don’t know what an augmented ninth or thirteenth is” Said the 72 year old Dick Dale in an interview with The Intertia. “I don’t give a shit. I make my guitar scream with pain or pleasure, and that’s what it does.” Dale’s rejection of musical orthodoxy is perhaps why even today, mesmerizingly modern-sounding guitar outbursts like Misirlou Twist and Let’s Go Trippin’ still have the power to enthral.
But, Dale hadn’t embarked on his musical career to try and redefine anything. Born Richard Monsour in 1937 to a Polish mother and a Lebanese father, the music-obsessed youngster had a keen interest in the cultural and musical traditions of both his parents. Though he studied piano at age nine, and loved playing the tabaraki, it was the guitar that he eventually gravitated towards. Being left-handed, Dick held a standard right-handed instrument upside down, and didn’t re-string (so his heavy E string was at the bottom of the instrument). This unusual way of handling the instrument, as well as his interest in incorporating more Arabic forms of melodic construction, similar to the ones he’d naturally grown up listening to by virtue of his family heritage, were key to his unconventional development.
We also have Dale’s father to thank for encouraging his young son to take up live performance; “My father tricked me into being on stage. He wanted to see how tough I was.” Dick told Alibi, “He had this friend of mine join up with a talent show. He told me my friend was going to play the guitar too, so there would be two of us. I didn’t want to do that, but I got up on stage anyway. [The other kid] ran off the stage to see if I’d panic, but I didn’t. I don’t back down from anything in my life. I won the contest.”
After moving to El Sugundo, California with his family in 1954, the teenage Dale became completely enraptured with both surfing and the youth culture that had sprang up around this most American of pastimes. When not chasing waves, the young musician began establishing a name for himself as a country-tinged rockabilly in local bars (and had re-christened himself as the cowboy-ish ‘Dick Dale’). It wasn’t long until Dale’s love of surfing started manifesting itself in his songwriting, and, crucially, his guitar playing.

For more reviews, click here.
The post The Genius Of… Surfer’s Choice by Dick Dale and His Del-Tones appeared first on Guitar.com | All Things Guitar.