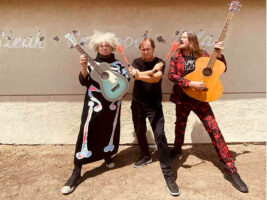 The Melvins will be reimagining songs from their career on Five Legged Dog, a 36-track record that’s also the first acoustic album from the sludge metal pioneers.

READ MORE: Buzz Osborne on four decades of Melvins: “Once I stopped thinking I had to do things a certain way, the whole world opened up to me”

Five Legged Dog will release on 15 October through Ipecac Recordings. The band describes the record as their “most ambitious project yet”; it will feature songs all the way from 1987’s Gluey Porch Treatments to 2017’s A Walk With Love & Death.
The four-LP edition of Five Legged Dog / Image: Ipecac Recordings
“I knew I wanted to do something ridiculously big,” said frontman Buzz Osborne in a statement on the album. “36 songs reimagined by us acoustically is certainly ridiculous but it works. The magic of the songs is still there regardless of it being acoustic.”
The band previewed the album with the acoustic version of Night Goat, a song from the band’s acclaimed 1993 album, Houdini.
Melvins drummer-vocalist and co-founder Dale Crover noted: “I think people will be surprised that we can do an acoustic version of a song like Night Goat without losing any of the heaviness. We also worked hard on the vocal arrangements. People are going to freak out!”

The album also features acoustic versions of songs previously covered by the band, including Sway by the Rolling Stones, Charlie by Redd Kross, Everybody’s Talking by Fred Neil and more. Jeff Pinkus from the Butthole Surfers also guests on the record, providing vocals and banjo to the tracks Don’t Forget to Breathe and Everybody’s Talking.
Five Headed Dog is available to pre-order now and will arrive in digital and double-CD editions first. Meanwhile, a four-LP vinyl release is slated for 28 January.
Five Legged Dog tracklist:

The post The Melvins are reimagining 36 songs from their career for their first-ever acoustic album appeared first on Guitar.com | All Things Guitar.