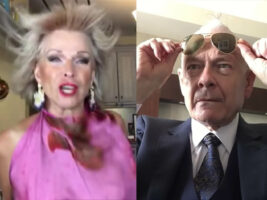 Robert Fripp is currently on tour with King Crimson, but his wife Toyah Willcox is going strong and continuing their Sunday Lunch series. In this week’s upload, Fripp shares his reaction to Toyah performing Wicked Game by Chris Isaak.

The video was posted to Toyah’s YouTube channel on Sunday (15 August) with the caption: “Transatlantic time differences and being apart is a Wicked Game to play for the Sunday Lunch lovebirds.”
Watch the video below:

It looks like fans can still expect weekly videos from the couple. Last week, Fripp reacted to Toyah’s cover of I Touch Myself by Divinyls, which she performed on an exercise bike.
King Crimson’s Music Is Our Friend tour is set to run in the US until 11 September. The progressive rock legends have also extended the tour with a leg in Japan, which will kick off on 27 November at Tokyo’s International Forum.
King Crimson’s current lineup includes: bassist Tony Levin; vocalist and multi-instrumentalist Jakko Jakszyk; multi-instrumentalist Mel Collins, and three drummers in Pat Mastelotto, Gavin Harrison, and Jeremy Stacey.
Willcox will also be performing several dates in the UK to support her upcoming album, Push Pop, due out on 27 August.
The post Watch: Robert Fripp reacts to Toyah’s cover of Wicked Game by Chris Isaak appeared first on Guitar.com | All Things Guitar.