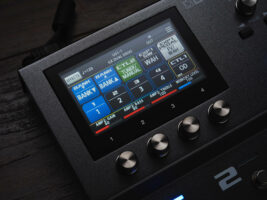 Why multi-effects still matter in the age of the pedalboard

Ad feature with BOSS
Guitar pedals are excellent. If you’re reading Guitar.com, that’s a statement you probably agree with. It’s a broad church: do you need the versatility of a studio-quality digital reverb? No problem. Do you want a lovingly-crafted, hand-soldered fuzz that a solo builder has poured a little bit of their soul into (also only 10 were made so you can now brag on Instagram)? Again, no problem.

READ MORE: The Big Review: Boss GX-100 review – is this touchscreen-toting unit the most user-friendly multi-effects ever?

But what of the humble multi-effects? The term has undergone something of a rehabilitation in recent years: gone is the association with ugly lumps of plastic that contained 99 virtual stompboxes, only two of which you would ever want to be caught using. Now, multi-effects have a somewhat professional air about them – thanks to the leaps and bounds made in the underlying tech, they’re now no-nonsense tools that can tackle basically any practice, studio or live situation a guitarist in 2022 might have thrown at them.
BOSS’ new GX-100 is the latest in a growing trend of floor-based multi-effects units, and continues to challenge just how many features, and how much power, you can cram into something that’s smaller and cheaper than the average pedalboard. But there’s a reason BOSS didn’t cancel production of all of the pedals included in the GX-100’s effects library when it was announced: physical pedals aren’t going anywhere. Luckily, a unit the GX-100 doesn’t have to replace your whole board (although it probably could) and is still an incredibly handy addition to your rig as a whole. Here’s why.
Digital modelling sounds better than ever
Digital audio processing, especially in the world of guitar effects, has come a long way. The processing power multi-effects pedals have at their disposal in 2022 makes digital gear from the 2000s look like a Commodore 64. The quality bottleneck is no longer a worry: your lovely digital reverb won’t be crushed and aliased into oblivion if you’ve got a multi-effects at the end of your chain.
On paper, the GX-100 stands toe-to-toe with units three times its price: 24-bit analogue-to-digital and digital-to-analogue conversion, 32-bit floating-point processing and a 48KHz sample rate. These are the specs that determine how often (sample rate) and how accurately (bit-depth) the processor samples your signal. The sounds you’re hearing from the GX-100 are already at audiophile levels of fidelity, and internally, the accuracy is bumped up even further: 32-bit audio processing offers a ludicrously high level of dynamic range per sample.
Image: BOSS
But it’s not just a numbers game: high-quality sampling means nothing if it’s not being used by a high-quality algorithm. Luckily, beefier processors have enabled things like BOSS’ AIRD (Augmented Impulse Response Dynamics) to simulate a real amplifier much more accurately, all the way from glowing preamp tubes to a roaring 4×12 cabinet shaking some air.
Even on a mid-priced unit like the GX-100, there’s no chance of the dreaded digital ‘fizziness’ being added to distorted tones, and the moment-to-moment feel of the amplifier matches what only the utterly top-of-the-line plugins and hardware could have done 10 years ago.
This doesn’t have to be goodbye for your stompboxes
The future isn’t just digital or analogue – it’s both. The GX-100 has an external effects loop, meaning any real-world stompboxes you just can’t let go of can be integrated easily into your virtual effects chain. You get the sound of your beloved pedal with the convenience of touchscreen drag-and-drop signal chain editing.
Image: BOSS

Not that you need to get rid of anything. The GX-100 isn’t exactly gargantuan, and if you’re a huge pedal enthusiast, it’s likely you’ve got a ‘board big enough to pop it on and still have five or 10 of your own stompboxes running.
Have you got an expression pedal lying around? Are you considering selling it because only one of your pedals has an expression jack? Well, maybe reconsider that – the GX-100’s expression pedal input is assignable to basically any parameter. Use your foot to sweep across the gain control of a fuzz pedal, pan delay repeats from left to right or morph between two different ambient textures. For something a little more traditional, you could create your own completely custom wah or volume pedal.
Additionally, because we’re basically in the future, more and more pedals support extensive MIDI control these days. This means that multi-effect units can act as the MIDI brains of a setup, linking all of your MIDI-enabled pedals together. Rather than changing the patch on your GX-100 and then having to separately cycle presets on different pedals, a MIDI cable and some BOSS Tone Studio tweaking should have everyone happily talking to each other and changing tones in sync.
Great-sounding home recording is essential for the modern guitarist
If you want to showcase your playing on social media, having a great-sounding way of getting yourself recorded is essential. Multi-effects units like the GX-100 make the process simpler than ever. You don’t even need an interface – it is an interface. Just grab a USB cable and you’re recording into a DAW, as direct as can be.
Even without certain circumstances that made the home studio very relevant over the last two years, sounding good in home recording is now essential if you want to get your name out there, and if it’s an easy and direct process, you can focus more on doing what you should be doing: playing guitar.
Image: Getty Images
The GX-100 even supports multi-channel stereo recording – if you wanted to do that with pedals into real amplifiers, you’d have to split your signal chain with an ABY box or a stereo pedal, make sure there are no ground loops, mic up two speakers, and then contend with either phase-cancellation issues, noise complaints or both.
Unparalleled bang for your buck
The BOSS GX-100 is $599 / £499. That’s similar to a lower-mid-ranged tube amplifier, and is minuscule in comparison to some pedalboard setups. And for your money, you’re getting: an audio interface, a MIDI controller, a huge library of effects, 23 different amplifiers, and a maximum signal-chain size of 15. That’s some serious value for money – try putting together a 10-pedal rig with two quality amps for less than four times that price.

Whether you’re looking to experiment with out-there tones, keep your online content varied or be the most versatile session player around you don’t have to break the bank to acquire a gigantic library of sounds.
Gigs are changing
There’s currently a trend towards lower stage volumes for the majority of live situations. A sound person is going to have a much easier time keeping everything mixed well on stage and out front if your guitar signal is confined to one, maybe two cables – less so if you’ve brought your full-stack down to the local pub and decide to crank the master volume for your solo.
And when a compact floor modeller can fit in a backpack and still sound as good as a real amplifier, do you really want to be lugging your head and cab down to the show in your hatchback?
The post Why multi-effects still matter in the age of the pedalboard appeared first on Guitar.com | All Things Guitar.