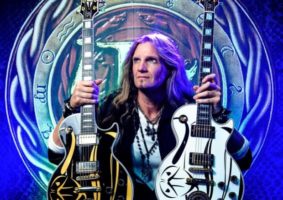 How to Shift Pentatonic Licks to Create "Outside" Sounds

Almost every rock guitarist knows his minor pentatonic scales inside and out, as they are the backbone of rock and blues soloing, song structures and chord progressions. This month, I’d like to demonstrate some simple ways to twist standard pentatonic licks to create unusual “outside” sounds.

In FIGURE 1, I play a sequence of 16th notes, all derived from A minor pentatonic (A C D E G) and based on a progression of thirds and fourths, moving from lower to higher strings in two-string pairs. This is a basic pattern that many of you may already know. For many of the note pairs I barre a finger across two adjacent strings at the same fret.

I like to hybrid pick this pattern, using my middle finger to pluck the higher note of each pair. The phrase ends with a whole-step bend up to the A root note, which I adorn with some soulful finger vibrato.

This is a cool lick as is, but let’s tweak it a bit by shifting the notes up a half step every other beat, temporarily moving out of key. As shown in FIGURE 2, beats one and three in bar 1 and beat one in bar 2 are identical to FIGURE 1. The “twist” is on beats two and four of bar 1, wherein I shift the notes up one fret and instead play them in Bb minor pentatonic (Bb Db Eb F Ab). This simple alteration pulls the lick out of the familiar and into an unexpected and new harmonic territory, creating an exciting dissonance and feeling of tension and release.

Let’s now apply the concept to other minor pentatonic patterns. In FIGURE 3, I descend across the strings in three-note groups, one note per string. I’m again employing hybrid picking, in this case using both my ring and middle fingers to pluck the first two notes of each triplet. As we had done with FIGURES 1 and 2, FIGURE 4 replicates FIGURE 3 with half-step shifts up to Bb minor pentatonic on beats two and four.

Another way to apply the half-step-shift is to move up a half step and stay there for another beat before shifting back down, as demonstrated in FIGURE 5. Again using hybrid picking, I begin in A minor, move up to Bb minor for two beats, and then return to A minor for two beats. The phrase ends with two beats in Bb minor then culminates in A minor with a G-to-A bend and some vibrato.

In FIGURE 6, each bar “sits” in A minor for two beats then shifts up to Bb minor. In FIGURE 7, bars 1–3, I use wide-stretch hammer-pulls to articulate most of the notes, repeatedly shifting from Am to Bbm on each successive beat. I bar 4, the lick “shape” is different, as I move to a more Randy Rhoads–like chromatic figure that gradually climbs up the high E string in half steps. This is a challenging lick to play fast, so practice it slowly and carefully at first and be aware of any potential discomfort in your fret hand, taking breaks as needed.