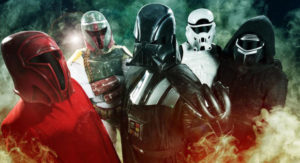 Galactic Empire, everyone’s favorite Star Wars-themed, progressive instrumental band, have announced a new album, Episode II. It will be released via Rise Records on May 4, as in May in the fourth, as in “May the force be,” um, we think you get the reference, unless you’ve been frozen in carbonite for the past four decades.

Episode II finds Galactic Empire venturing past the original trilogy and into the sequels. Feel free to check out the first official taste of the album, “Scherzo for X-Wings,” below. The John Williams composition was written for 2015’s Star Wars: The Force Awakens. For you listening pleasure, we’ve included the original cinematic of the tune version at the bottom of this story.

“While our debut allowed us to bring a new perspective to much-loved anthems, our latest technological terror is a darker, heavier and far more epic testament to the true power of the Dark Side of the Force,” said Galactic Empire. “We are confident that any rebel strongholds that remain after the last cycle will soon bow before the Empire. There will be no one to stop us this time.”

Stay tuned for more information. In the meantime, you can follow these gents on Facebook and pre-order the new album.