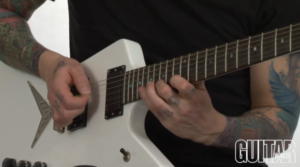 One of the things I enjoy about metal lead guitar is that most of the time I’m soloing over power chords, which consist of a root note and a perfect fifth above it (for example, an E5 power chord is comprised of the notes E and B above it).

With no thirds, sevenths or other notes included in the backing power chords, I have the freedom as a soloist to inject minor or major thirds and sixth and sevenths into my solo lines without them clashing with the chords.

In this month’s column, I’d like to focus on two of my favorite scales for soloing that include the above-mentioned intervals: harmonic minor and its fifth mode, Phrygian dominant.

The harmonic minor scale comes from the classical music tradition, and its interval formula is spelled 1 2 b3 4 5 b6 7.

In the same way that musicians learn the major scale’s seven modes—by starting on any of its given notes, thinking of that note as the root, or “one,” and playing up one octave and back through the notes of the “parent” scale—one can also generate seven modes from the harmonic minor scale (and melodic minor too). In my studies, I look at the major, harmonic minor and melodic minor scales as being three unique formulas of whole steps and half steps, from which one can devise seven different permutations.

Harmonizing a scale to form three- or four-note chords is a great way to get acquainted with the scale’s unique quality. Doing this with the first note of A harmonic minor gives you what’s called an A minor–major seven chord (Am-maj7).

FIGURE 2 shows this chord played in 12th position. FIGURE 3 illustrates an A harmonic minor single-note run that begins with eighth-note triplets and gradually works its way up through the scale. I then switch to eighth notes and finish the phrase with a descending melodic pattern based on thirds.

FIGURE 4 offers a sweep-picked arpeggio run that incorporates the use of a “tap-and-slide” at the top: using the edge of the pick, I tap the high E string at the 19th fret, slide up to the 20th fret and then back to the 19th, followed by pull-offs.

Let’s wrap up with a couple of neoclassical shred–style runs based on A harmonic minor’s fifth mode, E Phrygian-dominant (E F G# A B C D), which is formed by starting on the fifth scale degree of A harmonic minor (see FIGURES 5 and 6).