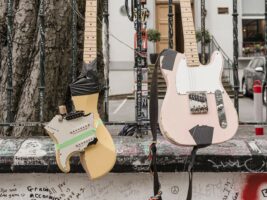 The debate surrounding the smashing of guitars has resurfaced in 2021, partially thanks to Phoebe Bridgers hammering a stage monitor with her Danelectro live on SNL. Now, Fender’s EVP Justin Norvell has weighed in on the topic, saying that the Fender camp are ok with it, but want to “strike a balance” as they’re still proud of their creations.

Fender’s executive vice-president of products Justin Norvell helpfully explained his and Fender’s position on the act in general. “The guitar is what I call a sonic paintbrush,” Norvell said to ABC Audio. “It’s something for an artist to use, to create with.”
“So while people look at a guitar being smashed and say, ‘That could go to someone else,’ or whatever, in that moment and what [an artist is] doing and how they’re feeling, if smashing encapsulates part of that…”
The call to ABC Audio was to speak about Fender’s new Kurt Cobain Jag-Stang guitar, which led Norvell to remember Cobain’s own guitar-smashing habits. “I was lucky enough to go to a Nirvana show and I did see Kurt smash a guitar over one of the In Utero angels at their first show of the In Utero tour,” he recalled.
He also noted that guitar-smashing is a “long-standing tradition” in rock, and that Fender is “alright with it. “But we also take a lot of pride in what we’re building and what we’re making. So there’s always a balance that we have to strike there.”
Norvell’s comments follow Phoebe Bridgers partially destroying her guitar during an SNL performance. While she drew the ire of a number of online commentators, smashing guitars predates even Cobain: rock royalty such as Pete Townshend and Jimi Hendrix both famously destroyed instruments as part of an expression of unrestrained rock n’ roll anger.
The post Fender’s Justin Norvell on guitar-smashing: “We’re alright with it” appeared first on Guitar.com | All Things Guitar.