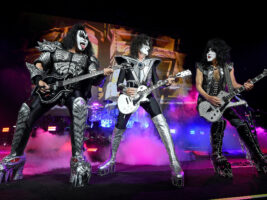 Famed glam rocker Gene Simmons has asserted that KISS will “continue in other ways” once their ongoing End Of The Road farewell tour ends.

READ MORE: Kikagaku Moyo on American bands that refuse to say goodbye: “I find that so capitalistic. Why can’t you guys just end and do new stuff?”

Speaking to YouTuber Dean Delray on episode 660 of his Let There Be Talk interview series, Simmons shared that the band’s future could lie in becoming a rock ‘n’ roll franchise. “The important thing is when it’s the last show, it’ll be the last show,” he told Delray, who described Simmons as his “ultimate dream guest”.
“KISS the touring band will stop. But Kiss will continue in other ways. I have no problems with four deserving 20-year-olds sticking the makeup back on and hiding their identity. Mark Burnett [producer of Survivor and chairman of MGM Television] shopped KISS: The Next Generation, which was going to be a competition show to find out who’s worthy to wear the crown.”
Simmons shared that while the show was never picked up, the band could continue on in a manner similar to the Blue Man Group, with multiple personnel filling in the roles of The Demon and so forth.
“KISS will continue in ways that even I haven’t thought of. But I can conceive of… Y’know, the Blue Man Group and Phantom of the Opera, tours around the world with different personnel,” Simmons elaborated.

“There could and should be a KISS show, kind of live on stage with effects and everything else, but also semi-autobiographical thing about four knuckleheads off the streets of New York that ends with the last third as a full-blown celebration of it… A full-on performance. Not with us. Although, not a problem stepping in every once in a while.”
Twisted Sister’s Dee Snider recently called out KISS and Ozzy Osbourne over “fake farewell bullshit”, taking aim at the 1970s glam pioneer in reply to a fan tweet saying “Impossible to miss a band when they refuse to go away, as Kiss has done for the last quarter century”, for which Snider responded with the brief statement: “Like a fart in a paper bag… :)”
The post Gene Simmons says “Kiss will continue in other ways” after farewell tour ends – like Blue Man Group appeared first on Guitar.com | All Things Guitar.