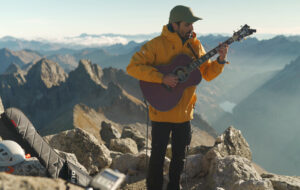 In a world where recording your music has never been easier or more accessible, it says something that Catalan guitarist Jordi Mestre Lopez has gone out of the way to make life hard for himself – but with spectacular results. We first encountered Jordi back in 2020, shortly after he had undertaken his first Soul Mountain expedition. In it, the guitarist, with the help of his cameraman and video producer Jordi Rulló and high mountain guide Roger Lopez de Haro, scaled the Tuc de Mulleres – a 3,010m peak located in the Pyrenees of Lleida in Catalonia – with a guitar strapped to his back, and at the top of the mountain recorded an instrumental track inspired by its majesty.

READ MORE: “You can only feel that heavy cloud for so many years”: Korn on discovering seven strings and the healing power of Requiem

You’re also raising money for the Kilian Jornet Foundation with a guitar giveaway, can you tell us a little more about this charity and why you’re supporting it?
“The Foundation was created by one of the most important mountain athletes ever, Kilian Jornet. After a long career in which he won all the most important mountain races in the world, managing to beat astounding ascension records on each continent, he decided it was time to do something for the mountains in return.”
“The foundation works with and finances several projects dedicated to studying, preserving, and raising awareness about high mountain environments. Working with entities like the World Glacier Monitoring Service (WGMS) to observe one of the most visible impacts of climate change: glacier recession. Studying this process is key to develop preservation projects of these glacial masses which accumulate 60-80 per cent of the world’s freshwater reserves.”
Image: Jordi Rulló
“Thanks to our collaboration with the prestigious Fanatic Guitars we’ve been able to get D’Angelico Guitars to give away an awesome D’Angelo Excel Tammany acoustic just like the one I used in this recording. We’ve organised a nationwide draw where a minimum €5 donation to the Kilian Jornet Foundation gets you a chance to win it.”
“All funds raised will be transferred to WGMS to support their initiatives, such as the acquisition of measuring equipment for researchers or the development of educational programs for schools among other things.”
Image: Jordi Rulló
Finally then, what’s next for Soul Mountain – more ambitious expeditions?
“I think Soul Mountain has just begun. I am a very active person and my head is constantly on the look for new goals and challenges. Right now, I have to rest for a long while due to an injury I’ve suffered in the mountains, but I am already thinking about our destinations for 2023.”
“I want to make the most of this period of recovery by writing new songs for Soul Mountain. I am thinking about climbing Aneto, which is the highest peak in the Pyrenees (3,404m). I will most likely put my skis on and pick the electric guitar up again to take Soul Mountain higher than ever before.”
Image: Jordi Rulló
“I also want to cross the Maladeta glacier, the biggest ice mass in Spain, in order to keep flagging the devastating effects of global warming, since rising temperatures in high mountain environments are threatening to make it disappear within 25 years.”
Find out more about Soul Mountain at soulmountain.cat.
The post How the hidden costs of climate change drove a guitarist to record on the peak of one of Catalonia’s tallest mountains appeared first on Guitar.com | All Things Guitar.